Going through my blog you will see that as much as I bake, I rarely make plain chocolate chip cookies. I felt it was time whip up a batch and turned to a new recipe I cut out of a flyer handed out at the super market. There was no citation as to where the recipe originated so if you know, post in the comments and I will give credit. 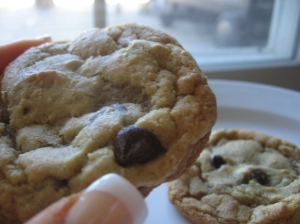 There was no description or intro for the recipe given so I was unsure how they would turn out. I was guessing they would be soft given the higher ratio of brown sugar to white sugar called for and the fact that they were being baked at a higher temperature (causing less spread while baking because the edges bake and set faster than with cookies baked at a lower temp). One thing that did catch my eye was the small amount of butter (compared to other chocolate chip cookie recipes) called for. I was unsure the effect of this on the end product.

I chilled the dough for 15 minutes and in between baking. I baked them only until the edges turned light brown and the centers not quite set (I kept a close eye because each pan seemed to need a different bake time ranging from 8-12 minutes to achieve my desired doneness). These cookies did infact come out of the oven soft with a chew but after storing in an airtight container overnight there texture was still chewy but a little on the tough side, almost as if they were stale.

The small amount of butter called for left these cookies lacking in the flavor department in my opinion. This could be remedied by increasing the butter amount, adding extra vanila or more add-ins (chocolate chips, toffee pieces, nuts, etc).

However, these cookies were good eaten warm right out of the oven with the gooiness of chocolate. They are sturdy once cooled completely and would be great with a scoop of good ice cream sandwhiched between two of them as their flavor would not greatly compete with the ice cream. All in all a so-so cookie recipe but with your own tweaks they may be a winner in your house. Especially with icecream sandwiched in between two of them! For me, I think I will stick to my current chocolate chip cookie recipe for now.

I rate these cookies a 6 as is but they may have potential.

Preheat the oven to 375 degrees.

In a mixing bowl cream together butter and sugars. Add the vanilla and egg until well combined (scraping bowl as needed to evenly combine ingredients)

In a small bowl, whisk together the flour, salt and baking soda. Add the flour mixture to the batter and mix on low speed just until absorbed. Fold in the chocolate chips (and nuts if using).

Using a medium scooper or a spoon, drop balls of dough onto a parchment lined baking sheet.
Bake for 8-12 minutes, or until edges are golden.
Allow to cool on sheet for 5 minutes to set. Transfer to wire racks to cool completely.
Store in airtight container.